Hi, I'm quite particularly new to Serpent, and I would say my reactor physics knowledge is... scrappy. It would be appreciated if I could get some comments pointing me in the right direction, or any critique on my methodology.

I have a cylindrical molten salt reactor input file that runs correctly, and the output file gives me two diffusion coefficients "CMM_DIFFCOEF" and "INF_DIFFCOEF" from the two calculation methods noted in the output parameters page http://serpent.vtt.fi/mediawiki/index.p ... arameters .

I was wondering, it is possible for serpent to compute different regions of a reactor according to input geometry?

To illustrate using the picture below, I want to calculate the diffusion coefficients for 1) the volume of the inner core, and 2) other "n" cylindrical sectors extending outwards the reactor core to "nodalize" my results. 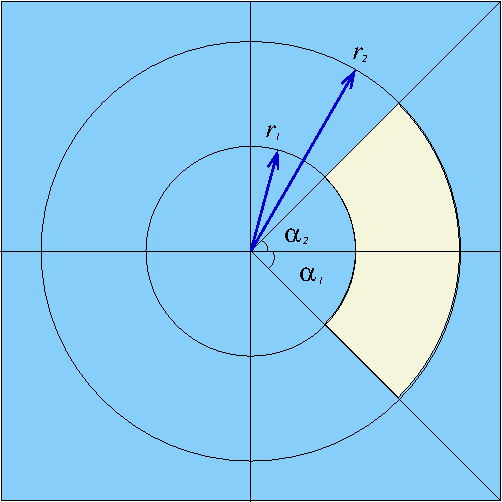 I know I can compute macroscopic cross sections for a region of the core by defining a detector and an MT number throughout the reactor, but I'm not certain on computing the diffusion coefficient at a specified region. The reactor design is non-homogenous extending outward of the core, so my understanding is that different sections should have different diffusion coefficients.

You can consider this already while building your geometry, but if you have a ready made geometry, you could simply do something like in the example below.

However, you should note that the Cumulative Migration Method (CMM) approach does not work for finite/partial geometries. Thus far there is no formulation of the method that could be used to obtain diffusion coefficients for subsets of a system.

Thank you for the detailed reply and pointers to a great example, Ville.

I have my geometry currently set-up and I am defining subset universes to calculate group-constants. I suppose this means that if I use the "set gcu" function to calculate homogenized cross-sections that all the three diffusion parameters "1) INF_DIFFCOEF, 2) B1_DIFFCOEF, and 3) CMM_DIFFCOEF", are garbage results and cannot be approximated?
Top

CMM_DIFFCOEF as noted gives very good diffusion coefficients in infinite lattice geometries, but the results in sub-regions are nonsensical.

Currently the best way to calculate diffusion coefficients in sub-regions is to use the transport correction approach, where a pre-calculated transport correction curve is given for each material that exhibits important non-isotropic scattering using the set trc card. This requires some additional work to set up however.

One method for doing this is to run an external source simulation for an infinite homogeneous system consisting of the material to be evaluated with a fixed source of neutrons according to a suitable fission spectrum. If you switch cmm on in this calculation, you'll get the homogenized transport cross section (CMM_TRANSPXS) as well as total cross section (INF_TOT) as an output and can use them to evaluate the transport correction.

This transport correction curve needs to be pre-calculated on a fine enough energy grid so you'll need to choose a fine few group structure.

For LWR calculations the transport correction needs to be applied at least for the water in the problem.